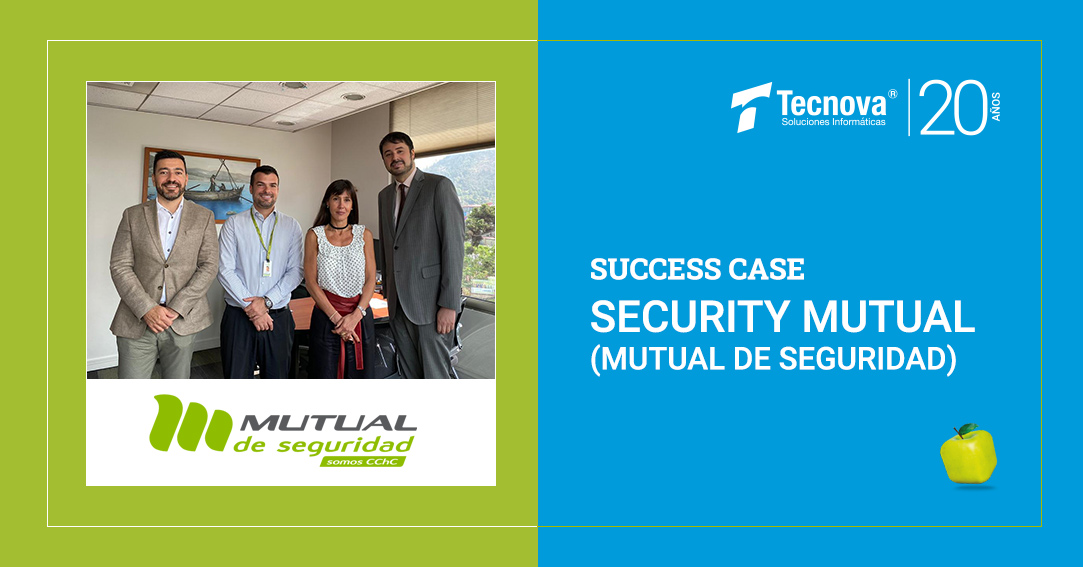 The Security Mutual hired Tecnova to design and build the Mutual Integra system that consists of creating a component that functions as the “Inbox”, with which users will interact during the execution of process flows. The Worklist presents the available and pending tasks and it I possible to access the different forms and actions that allow the management and resolution of the background applications of the SUSESO (Superintendence of Social Security). Oracle BMP Suite technology was used for development. This solution contains all the functionality necessary to control the flows and tasks created for this project.

The Mutual Integra project was developed at the end of 2017, when SUSESO informed them that it would change the way it would request information to respond to insurance claims under Law 16,744, which would change from its manual paper management to referral via web. So the Mutual Security Prosecutor’s Office decided that it would develop a system that would handle these requests: “Previously, other options were seen that did not work, so there was fear in the construction of this system”, says René del Real, Mutual Senior Lawyer, and who has been part of the internal team in charge of project development.

They met Tecnova through SUSESO, and, “since it had the knowledge and experience, with good results”, they decided to contact them, Del Real continues. The system was developed during 2018 with the Tecnova team. As of the end of 2018 the project was completed, with a white march that lasted until May 2019, so the system is already operational.
René del Real states that “the system is successful, it has worked quite well, with a very large operational continuity. […] Today improvements are being made to the current flow with greater functionalities and we will also expand the flow, to integrate other areas of Mutual”.

Hildemir Prado, Project Manager at Mutual adds that “The idea of Mutual is to add other processes, in addition to prosecution, in order to make it more robust and cross-cutting. Which makes the community between Tecnova and Mutual strengthened with the other projects in the folder.”
In the old time, the process was done by mail, but the responses and interaction were very slow. Now, the process is more transparent, it allows scaling, SLAs, reporting, tracking, control of each of the users.

Soledad Elizalde, Assistant Manager of Legal Affairs of Mutual Security, complements stating that “in the old manner everything was via paper in SUSESO and now with SUSESO’s PAE project, the process is faster because we are all interconnected” and further adds that “the success of the process is multifactorial, which has achieved an average response per case is 3 days.”
Current process automation allows you to quickly search for related documents within the system, speeding up analysis times to respond quickly.

“Mutual chose to integrate into the SUSESO system, which means that the requirement is received through the system, then automatically searches for the background in the different systems that Mutual Security has, and only in the case that it is not in the organization’s systems, the lawyer requests the specified user the needed document, which leads to the request reaching through a flow with dates, alerts etc. in order to respond with the requested time of SUSESO”, says Del Real.

The goal was to create a simple, ductile process in which all the actors involved cooperated: “To develop the project, an involved of all the collaborators related to it within The Mutual was determined. It was understood that there should be a teamwork, from the headquarters down. So, a side-by-side change management work was done with all participating users. And this means that today you can say that, in addition to being a very solid platform, a good transition was also made,” recalls Elizalde.

“There was a constant accompaniment and support from the Tecnova team. It was a very consultative accompaniment as well. The Project Manager, Carolina Maturana, has a very in-depth knowledge of the project, together with the entire Tecnova team… It is essential that your provider knows the process in detail and that it alerts you up to prevent the impacts of developing a process. Her advice and accompaniment are appreciated for it helps to make good decisions,” says Soledad Elizalde.

“In addition, the technical part of Tecnova, which worked on the SUSESO project, supported the development of this project, which helped corrective measures to be carried out on time,” says Hildemir Prado, and continues to say that, “now the next project is add to the process the Human Resources area to automate their processes.”

Rene del Real states that the most concrete results is that “‘we have a process in shape, with absolute traceability, and the idea is that information will continue to be added, which will allow us to have reporting, and go beyond the formal and carry out control of the information that is being worked upon.”

Heinz Susaeta, Head of Mutual’s Project Department, says that “the Mutual Integra project has been a very successful one and a model project within Mutual”. He goes on to say that “not all projects go mostly on the expected path, as we achieved with this one.

With Tecnova we were always aligned in the way of doing the project and understanding the culture of the company. They took good practice and that led to success. Tecnova’s willingness to understand culture and from there make it more flexible and also impose, in a good way, resulted in a successful project. The involvement in the business and the collaborative work with it was also relevant in success. The interactions were always propositional and respected among all involved parties.”

“From there Tecnova is a very referential provider for Mutual. I have the best impressions of Tecnova’s team,” concludes the Head of Mutual’s Project Department.