What is CaaS?: A model for developing applications 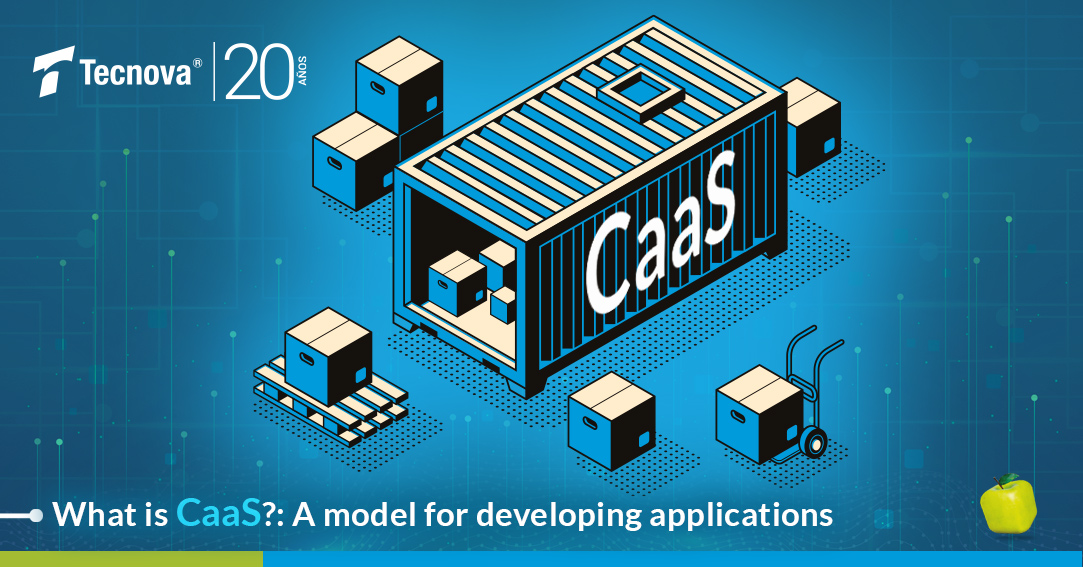 What is CaaS?: A model for developing applications

Most certainly this acronym doesn’t ring a bell, but if we talk about Container as a Service – or Contendor as a Service as it’s known in Spanish – you may remember it. CaaS is defined as “a model in which IT organizations and developers can work together to build, deploy, and run their applications anywhere,” as defined by Docker. Another way to understand what CaaS means, is as an intermediate layer between IaaS and PaaS. This is a form of container-based virtualization in which container engines, orchestration, and underlying compute resources are delivered to users as a service from a cloud provider.

CaaS enables an application environment managed and secured by IT areas or cloud service providers. This environment consists of content and infrastructure. There, developers can build and deploy applications in a “self-service” manner, as it is called by one of the most important CaaS providers in the world.

At Tecnova we want to tell you about what it means to develop apps in a CaaS. To do this, in this note we will address its main features and how useful it can be to you depending on the development you build.

What is a Contendor?

Before delving into what CaaS is, it is necessary to define what is meant by contender . Docker defines it as “a standard software unit that packages code and all its dependencies so that the application runs quickly and reliably from one computing environment to another.”

This unit is not new. According to TechTarget, container technology is rooted in the beginning of the 1960s, and the isolation of the chroot process developed as part of Linux in the 1970s. Its modern form is expressed in containerizing applications, such as Docker itself and containerizing systems, such as LXC (Linux Containers). Containers used in a CaaS are designed to help developers and IT departments develop, run, and manage applications on them.

In a CaaS model, containers and clusters are provided as a service that can be deployed in on-premises or cloud datacenters   or in the cloud  (some of them are Amazon Web Services (AWS) and its EC2 Container Service (ECS), Rackspace, and IBM.

For developers, a CaaS model simplifies the process of building a scaled container and deploying applications. For IT departments, CaaS is a service for deploying containers with security and governance control in the management of the IT area of any company, says Webopedia.

Features of a CaaS

For the Docker company, using CaaS is ideal for the Developers and Operations teams of a company that is developing applications. CaaS does not enforce a workflow but provides a framework for managing to improve the delivery of an application. That means CaaS requirements must be flexible to cover the environment. Among the features that a CaaS provider must have are the following

According to Equinix, this is necessary, because containers have all the components needed to run application files, without consuming many resources. Therefore, containers enable software developers to “implement digital business needs of a company faster.”

If the customer wants to develop an application quickly, securely, and scalable, the most viable option may be through containers. Here are some of the benefits of using it, according to IBM:

• Portability: When creating an app in a container, this app will have the necessary elements to run. This includes dependencies, and configuration files.

Portability enables end users to reliably launch applications in different environments, such as public or private clouds. This speeds up the development process, making it easier to switch to a different cloud or provider environment

• Efficient and Lower Costs: Because containers do not require a separate operating system, they require fewer resources than a virtual machine (VM). In fact, a container requires a few dozen megabytes to run, allowing a server to run multiple containers.

Containers do not interact and are somewhat isolated from other containers on the same servers. If an application crashes for a container, other containers can continue to use it without experiencing technical issues.